Catering, shops, services, the schedule… Find our guide that will rapidly provide you with useful information on the preparation and smooth running of your stay in Les Angles.

A true resort village, Les Angles has developed at the foot of the slopes and managed to retain its authentic character while meeting the requirements of a modern ski resort. The location, unique in the Pyrenees, where the slopes reach the old village, makes it one of the most pleasant resorts in the Massif.

Eating out on slopes of Les Angles

Catering, shops, services, the schedule… Find our guide that will rapidly provide you with useful information on the preparation and smooth running of your stay in Les Angles.

Discover all the activities and leisure pursuits offered by our service providers with your family or friends. You’ll find great activity plans here!

Prepare your stay in Les Angles by finding out about transport, the road conditions and the different kinds of accommodation. Respectful towards the environment, the resort lists its commitments (labels, standards, electrical terminals, etc.).

The Les Angles ski resort also plays a part thanks to its partners.

The Skiing Club of Les Angles was created in 1966 on the initiative of a group of enthusiasts including Paul Samson, the Mayor and founder of the resort two years earlier.

Since its creation, it has trained young athletes from the commune and residents of the Pyrénées Orientales and neighbouring departments. 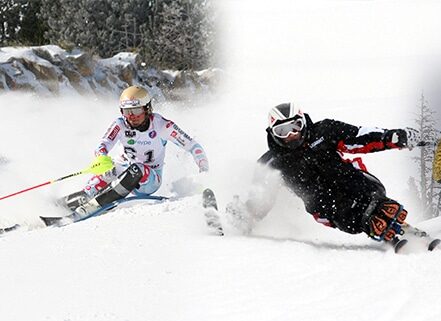 She began her international career in BMX. A few years later, multiple sclerosis completely paralysed her legs and forced her to halt her participation in the sport temporarily.

By dint of determination, she learnt to walk again and returned to the sport, this time in the disabled snowboarding category.

In 2014 she won a place in the French team and took part in the Paralympic Games in Sochi, at which she won a superb silver medal, and she was decorated as Chevalier de l’Ordre National du Mérite by the President of the Republic.

Since then, she has excelled in her two favourite disciplines (Banked Slalom and Boardercross) and continues to shine on the roof of the world, as she won a gold medal in Snowboard Cross in Beijing in 2022.

Some of her results:
– Silver medallist at the Paralympic Games in Sochi in 2014.

– Silver Medal and Bronze Medal at the Pyeongchang 2018 Paralympic Games.

– 2022 Gold Medallist at the Paralympic Games in Beijing

– 2022 Presented again with the Légion d’Honneur, raised to the category of Officier de l’Ordre du Mérite

Cécile Hernandez has also won 3 gold and silver medals at the world championships.